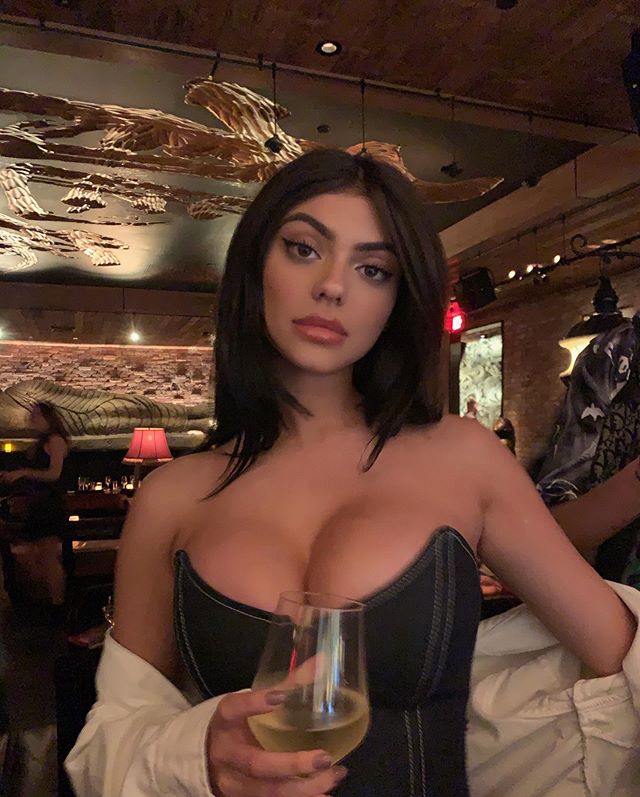 There are numerous ways you can skyrocket your popularity within a few days, and the Internet provides the best platform for such activities. Enter Kelsey Calemine, who stepped into the limelight after posting her photos on Instagram. Wait, we all do that. But why is she receiving all the attention while we are getting the short end of the stick? Not when you like a hybrid of two famous stars. Yes, Kelsey has the best features of TV star Kylie Jenner, and actress Lucy Hale morphed into a single person. Followers believe that she has the pot of Kylie Jenner and the eyebrows of Lucy Hale. It is often surprising what a little similarity can bring wonders in your life.

Kelsey’s stardom journey started when singer Lucy Hale posted a picture on her Instagram and confirmed her followers on the similarity. She asked whether the person in the photo was real or a digitally morphed image. Of course, Kelsey is a live example of the mixed features, and this incident alone was enough to make her famous overnight. The news quickly spread on the internet and Kelsey started getting more and more attention. Galore magazine even declared her “Instagram babe of the week.”

Kelsey was born on January 14, 1999, in Los Angeles, California. She grew up in the beautiful city of LA alongside her parents and siblings. The girl also rocks her nickname Fatherkels, which is the name she goes by on her Instagram account. At the age of twenty, the girl has accumulated quite a fanbase all thanks to her aesthetic qualities. Well, the internet is going to lose its mind when you look like another member of the Kardashian family.

Surprisingly, the girl has succeeded in keeping her family details out of the scenario. It is her decision to disclose or keep her background to herself and fans have respected her wishes. However, some information has emerged on the internet after she stepped into popularity ranks. The girl holds an American nationality and has a mixed ethnicity.

As it happens, her parents are American and Italian. She attended Oak Park High school located in California. She has a step-brother, but like her mother and father, the guy remains unknown to the eyes of the media too. Also, we are unaware of the religion they follow. The family is pretty well-knot and lives together in California with a dog named Mochi. 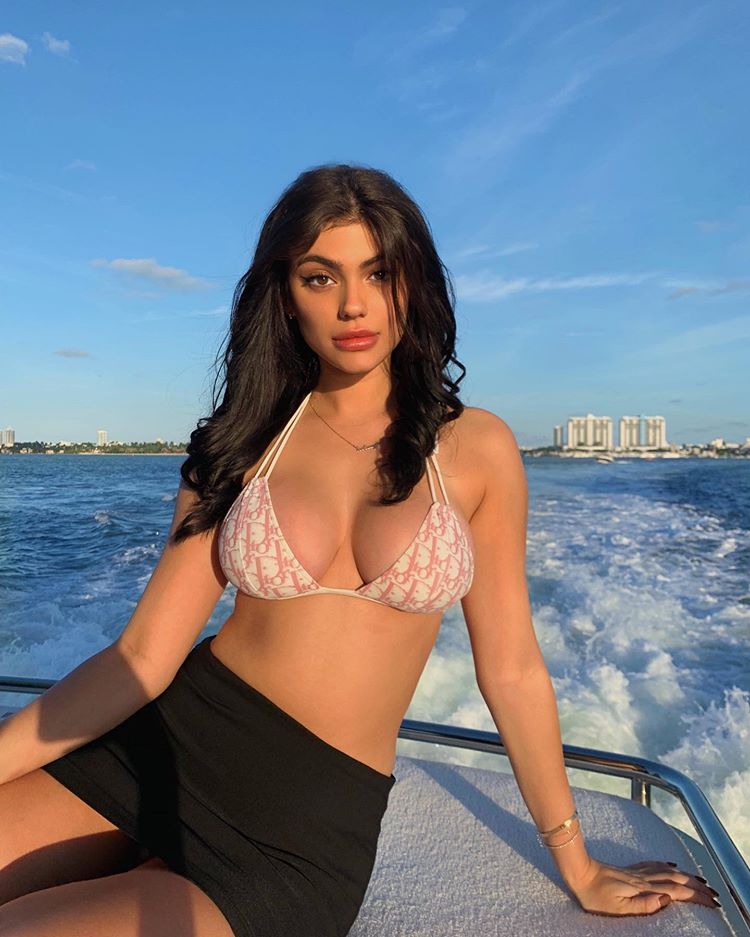 Well, you don’t earn the name of the Instagram star looking like a potato. Kelsey is undoubtedly a heartthrob, and you can see that from her pictures. The girl is truly blessed with good genetics, and she works hard to keep her body measurements in check. The star stands at the height of 5 feet 6 inches or 170 centimetres. With proper nutrition and workout, she maintains a healthy weight of 52 kg or 114 pounds.

All the hard work and sweating has rewarded her with a curvy body that is easy on the eyes. Her measurements from bust, waist, and hip are 33-24-34, respectively. The girl has the bra size 30C, but her shoe size is yet to emerge on the media. Her hazel eye colour perfectly matches her brown hair and gives a complete magnetic persona.

Kelsey has a healthy love life, as seen from her social outlets. Currently, she is dating someone named Ryland Lynch. The boy is an Instagram star by profession and other details surrounding the guy is pretty much hazy. The two confirmed their relationship via an Instagram post dated March 24, 2017. There are several photos of the duo sharing their love and time on media.

Before she stumbled upon her current boyfriend, Kelsey shared her love timeline with Asher Brown. The two dated for a while and parted ways with reasons unknown to the public.

Sources mention that Kelsey and Marshmellow posted many flirty images of each other on Instagram. They even uploaded a photo on Valentine’s Day. They looked comfortable together and had flirty captions on the pictures.

Kelsey Calemine Kylie Jenner – Career, Twitter, and How Much Is Kelsey Net Worth? 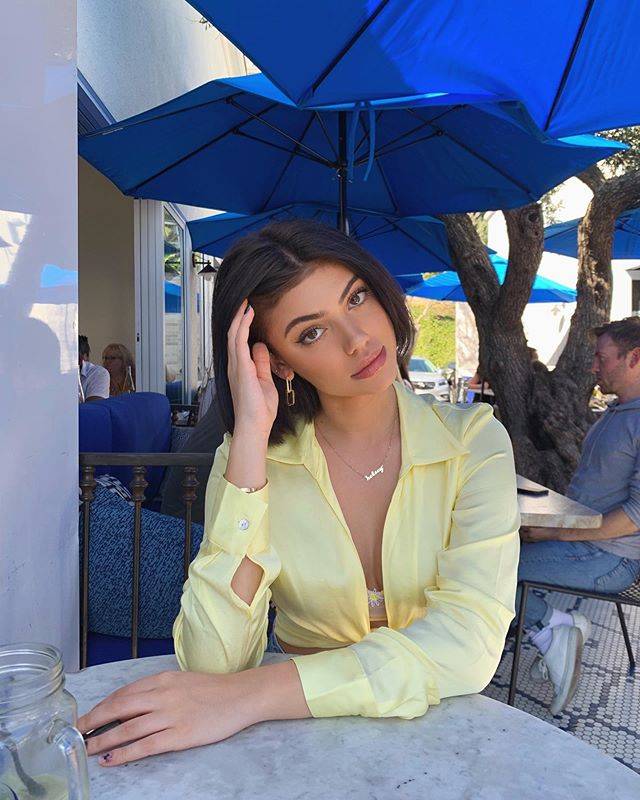 Kelsey’s modelling career started with her Instagram account. The girl is just beginning to venture on her vast career, and she has already gained so much recognition on the media. After the boost of her Instagram photos, she has promoted some products and collaborated with some other Instagram stars. After all, the girl gets compared to Lucy Hale and Kylie Jenner. Endorsements are just the tip of the iceberg compared to the grand scale of achievements she has yet to taste. Her photos and support have helped her gain a considerable amount of fan base on social media outlets. Currently, she has 2.7 million followers on her Instagram account. One look on her pictures and you can justify her popularity. Kelsey is also active on Twitter with 54.1 thousand followers.

The girl has several pictures that highlight her appealing aesthetics. She also posts photos of her friends and other adventures. The Kylie split-image wears branded clothes that compliment her style. With all these achievements, the girl is estimated to have a net worth of $300,000. We don’t have details on her assets or her family income.

Some Interesting Facts on Kelsey Calemine

What is Kelsey Calemine famous for?

Kelsy is American and belongs to mixed ethnicity.

Has kelsey Calemine had Plastic Surgery?

Some of her friends have confirmed her going under surgery, she herself stated of getting botox when she was nineteen.

How did Kelsey Calemine became famous?

Calemine became famous by postig pictures and videos of herself on Social media platform Instagram.

How old is Kelsey Calemine?

How tall is Kelsey Calemine?

What does Fatherkels do for a living?

Kelsey Fatherkels is an internet celebrity; she makes a living by modelling.

Who is Kelsey Calemine dating?