Who is Devon Waller?

What happens when a celebrity gets engaged to another? Exactly, headlines and thousands of excited fans. Such is the case with Devon Waller. Don’t get me wrong; it is not the sudden topic that made Devon who he is today. He is a well-published model himself. So, who is the lucky girl that skyrocketed his popularity? Hop in the ride to explore the details on this handsome hunk and some other information about his life.

Devon is a private guy. He likes to keep his personal life out of the flashing cameras and publications. From his looks, the guy seems like someone running in his thirties. He is originally from NY City, but details on his parents are hard to find.

However, his personal Instagram account introduces the man as a published model and a TV Personality. We are not questioning his modelling skills because the photos are top-notch. We also have no information on his educational qualifications and career journey.

We would not jump to conclusions and consider her Devon’s wife but looking at the perfect resonance; the thing is not too far. The hunk is engaged to Hazel E. Some of you might have already guessed, but to those of you living under the rock, Hazel is a television personality and rapper by profession.

Hazel is known for her appearance in the “Love & Hip-Hop Hollywood”, a reality TV show. During the entire show, she engaged in a back and forth relationship with a guy named Yung Berg. The man is now known for his alternate moniker “Hitmaka”.

As the show progressed, Hazel got portrayed as a character that madly fell in love with the rapper. Yung, on the other hand, acted as if he didn’t care about her and their fling ended before it even began. But this was all in 2014, and both of them have moved on with their lives.

Also, we have seen Hazel try out her love relationship with comedian Katt Williams in the past. The link did not shine as brightly, and the details remain under the shadows. In a 2016 interview, Hazel shared that she had to part ways with Katt after she had a miscarriage. The rapper also added that they had a misunderstanding and times were hard.

Hazel, as we know, went on to drop the show and start her brand new rap career. With several professional bumps along the way, Hazel has always tried to keep herself away from any drama in these recent years. Little did we know, she had been searching for her potential partner in the process. Fans finally got to see the rapper finding her significant other in October of 2019. This time, it seems that she has found a keeper.

The news spread like wildfire from her Instagram account. She flashed a 10-carat diamond ring and guessed who just proposed the love of his life? Devon popped the big question somewhere in October and got a big YES in return. Hazel took this big news and decided to share with her fans. Her caption says it all though. She cherished the moment and thanked Devon for all his support.

Wait! We still have some additional news to fuel your heating engines. Devon and his soon-to-be wife had a baby just after two months of the engagement. The couple shared the stories about pregnancy on Instagram and the baby was born on June 15. Her name is Ava Dior Waller.

Okay, what’s with celebrities cheating rumours just moments after proposals and marriages? The whole thing might have been staged, or internet hearsay but Devon got caught red-handed by her girl. The news came to light just days after Hazel announced her pregnancy news.

Devon is texting a social media personality by the name of Celina Powell. There are photos of the man texting Celina in her DMs. When Hazel tried to warn her about the relationship, the girl claimed that Devon texted her first. Poor Hazel! That must have shredded her heart.

In another photo, we can see that Devon texts the girl and tell her that Hazel had access to his accounts. He seemed somewhat worried about not getting a chance to talk to Celina. These are all screenshots, though. We do not know the truth behind the matter, so it would be best not to jump to any conclusion.

Devon has not revealed his income sources or his actual earnings to this day. It is of no doubt that the man makes a decent amount of money from his modelling career. But his lifestyle and lavish hobbies surely doubt the word “decent” doesn’t it?

Sometime earlier, he had proposed his now-fiancée Hazel E with a 10-carat diamond ring. That is something a person with mediocre earning cannot afford. Maybe he has some side businesses to fund his lifestyle. We will never know until the guy confesses the facts himself.

On the other hand, his fiancée Hazel has some envy-worthy earnings. Talking about yearly income, she takes home a hefty amount of $100,000. According to her 2019 statistics, she has an estimated net worth of $500,000. This money is sure to elevate Devon’s revenue too. 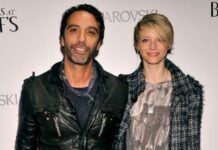